Flux and Nvidia: Bringing Web3 to the Next Level 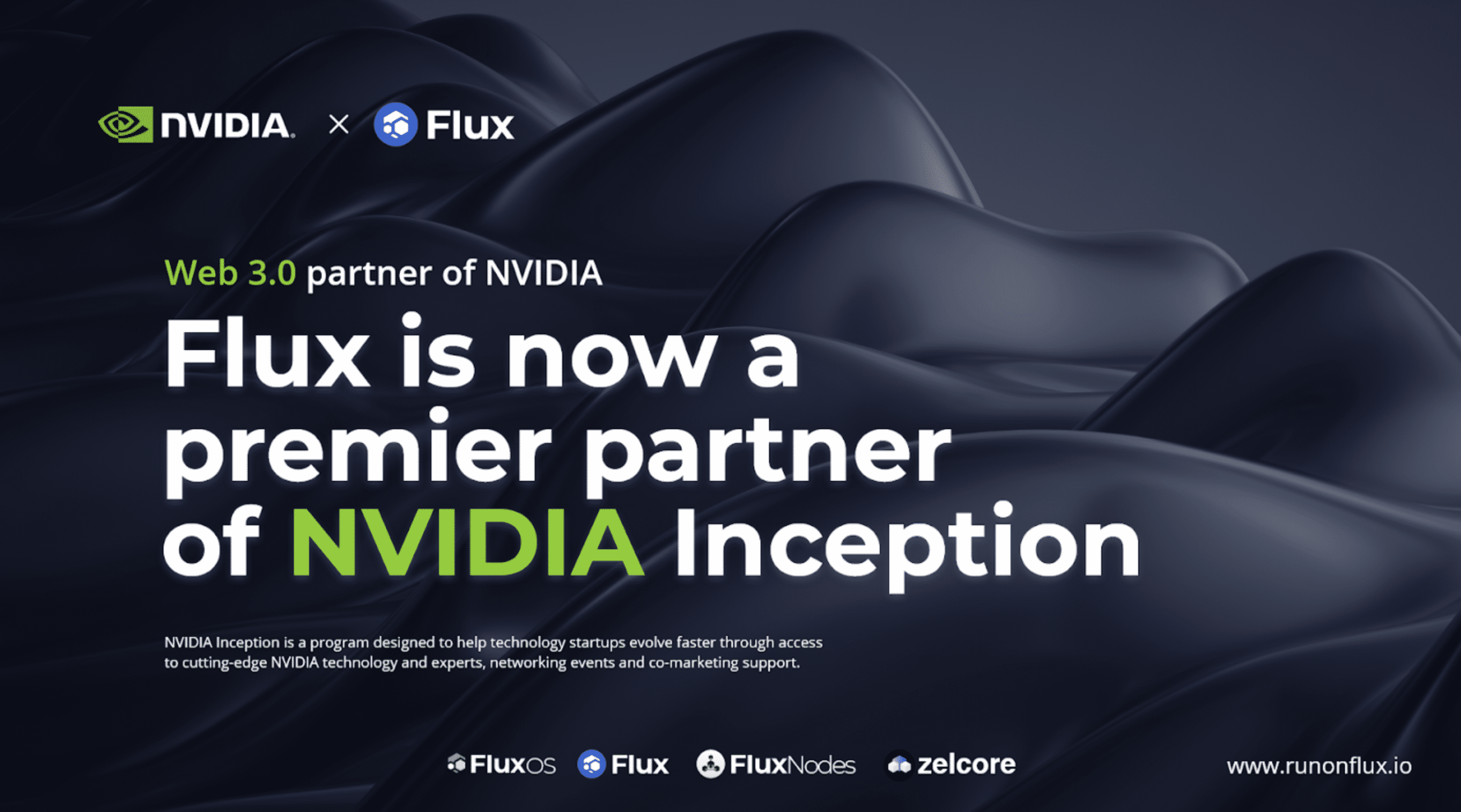 The future of the web is about to be revolutionized by a partnership that was just announced. Flux, a company focused on creating decentralized applications for the Web3 ecosystem, has partnered with Nvidia to bring its vision of Web3 to life.

The goal? To create an entirely new way for people and business owners alike to interact with each other through crypto-enabled experiences without having any centralized intermediaries in between them.

The New Web3 for a Decentralized Internet

Flux was founded with the goal of pioneering blockchain technology and creating the fundamental technological, infrastructural, and technical foundations for Web3 in mind. A wide range of decentralized computing services and blockchain-as-a-service solutions are available. The Flux ecosystem is made up of: The Fluxnodes’ decentralized infrastructure, FluxOS cloud operating system, Zelcore self-custody multi-asset wallet and blockchain app suite, and finally the Flux blockchain for on-chain governance, economics, and parallel assets to provide interoperability with other blockchains.

Flux is a distributed consensus system that enables the New Internet to survive, thrive, and scale in an increasingly hostile environment. Projects and development teams do not have to use the Flux blockchain in order to utilize FluxOS, so they may access necessary infrastructure while still keeping all of the chain’s unique characteristics. Flux is one of several components that go into a well-balanced distributed computing portfolio focused on the next generation of the Internet.

Flux is a company that is focused on creating decentralized applications for the Web3 ecosystem. This means that they are working on building the technological, infrastructural, and technical foundations for Web3. Their goal is to create a new way for people and business owners to interact with each other through crypto-enabled experiences without any centralized intermediaries in between them.

The future of the Internet is here, as WEB3 is an evolved decentralized Internet that empowers users and delivers a unique experience by utilizing cutting-edge technologies such as blockchain, artificial intelligence, edge computing, and machine learning.

Web3’s evolution and growth will be accelerated by the cross-team collaboration with Nvidia, which shares a similar lust for creation. Flux will be able to develop faster because to access to NVIDIA’s cutting-edge technology and specialists as well as industry networking.

Decentralized Applications on The Web3

Flux is a full ecosystem that is designed specifically for developers to use while creating and hosting decentralized applications on the Web3. It runs a strong distributed computing network with over 2600 nodes, and it uses blockchain technology to build a fully decentralized infrastructure for Web 3.

Flux is the first blockchain project that we’re aware of with a product development team working in tandem with an operational multi-functional platform. Flux is not simply a single-use case project; it’s a fully functional multi-purpose platform. As demand for Web3 infrastructure continues to rise, Flux is poised to deliver. The Flux platform is uniquely designed to address the growing demand for decentralized applications.

Nvidia as An Accelerator for Flux

Nvidia’s support of Flux will help many developers build better-decentralized networks more quickly, using Nvidia hardware and software technology. The collaboration between Flux and NVIDIA will allow for an accelerated development process that enables real-world results on a global scale. This partnership with one of the industry’s leading companies will also help to shape the future of Web 3.

Flux has already achieved the first of its promises and built a one-of-a-kind cross-blockchain bridge called Fusion. The self-custodial Zelcore wallet’s application, Fusion, allows you to move assets between supported blockchains in a simple, secure, and rapid manner.

Flux is also working on ‘Proof of Useful Work’ (PoUW), a solution for environmental problems plaguing Proof of Work mining in the blockchain. Instead of blockchain mining being wasteful, Flux will employ new hashing algorithms and methods that will utilize GPU hashing power to solve real-world challenges such as rendering, deep fake detection, or protein folding.

The Nvidia-Flux alliance will also see the two companies working together on a number of other initiatives, such as in the development of new decentralized applications (dApps), educational content, and marketing & business development activities. Stay tuned for more news about this exciting collaboration!

To learn more about Flux visit the flux site.

Flux has a clear roadmap for the future, and they are well on their way to achieving their goals. Some of their planned initiatives for Q1 2022 include the following:

The Inception partnership program was created by NVIDIA because they have a thirst for progress. NVIDIA Inception is a program that allows technology startups to grow faster through access to cutting-edge NVIDIA equipment and experts, networking events, and co-marketing support.

NVIDIA is joining forces with Flux, the new kid on the block in the blockchain business. NVIDIA will assist Flux in building the decentralized infrastructure required to power Web3, which opens up numerous collaborative possibilities for NVIDIA and Flux to advance the Web3 revolution quickly.

Flux will also be able to tap into NVIDIA’s top engineers and developers’ vast knowledge to assist expand and developing the Flux technology. To improve Flux’s exposure and reach, Flux will have access to relevant networking events and co-marketing assistance.

Theory U: The Change Management Method and Accelerator for Decentralized Autonomous Organizations (DAO)

The Use of Artificial Intelligence in Healthcare

Artificial intelligence in healthcare is a growing trend as the technology becomes more advanced and able to recognize patterns and identify potential risks. This can help doctors make better treatment decisions, improving patients’ outcomes. Artificial intelligence is being used to detect patterns in patient data, such as hospital visits and prescriptions. This can help doctors…

When you answer a user’s question with a chatbot, it’s essential to understand what they’re actually expecting and how the bot should respond. For example, when a user asks the bot, “what are your office hours?”, they’re expecting to receive a response that includes their schedule. It is essential that the bot can determine what…